Everyone who has been a member of NaasLTC for more than a decade knows the effect Mary Rose Lyons had on tennis in our community and on the sport in Ireland.  Mary Rose Lyons passed away in April 2017, so in order to keep her spirit alive in the club, we wanted to post something on the site to remember her.

Many thanks to Claire, her daughter, for providing the below.

“An extract from the early years” 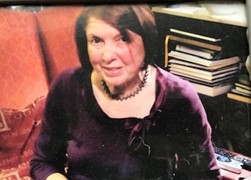 In the 1980’s Mary Rose Lyons started to write the history of our club.  What followed was Volume 1 covering the period 1882- 1992 and then Volume 2 covering the period 1992 -2004.  Her aspiration was that it should reflect the sheer enjoyment that so many tennis players have had throughout the decades in Oldtown and the relevance of times past to the present and indeed the future.

The foundations and early years of the club were chronicled by another member who summed it up as follows “A chronicle of the Naas Lawn Tennis Club must commence with a short reference to the de Burgh family of Oldtown, Naas, as, without the never failing interest and generosity of three generations of this family, the club would never have come into existence and could not have survived.”  It is this legacy that many members, past and present, continue to support to make our club one of the most outstanding clubs not only in Leinster but also in Ireland.

On August 2nd 1880, a meeting of the Naas and Country Kildare Cricket club was held in the then pavilion (the present “shed”) in Oldtown at the request of Colonel de Burgh, who wished to “organise a country club for cricket, football, polo, pigeon shooting, lawn tennis and archery.”  The proposal was accepted by the Cricket Club and thus the Country Kildare Club came into existence on January 1st 1881, and retained its name until October 26th, 1966, when it was altered to that of Naas Lawn Tennis Club.  The Rules of the Club were framed at a General meeting held on February 18th 1881 , and provided for an annual subscription of £2. (about £185 today!).

In those early days no games of any kind were permitted to be played on the Club grounds on Sundays and this bye law was not changed until 1924.  At a General meeting held on April 29th, 1893 the club colours were discussed and the Club colours at the time of red were changed to that of blue and white.

In February 1906, the first steps were taken towards erecting a pavilion by funds raised in Debentures of £5 each, the club guaranteeing 4% interest and repayment of shares, one at least every year and that the total expenditure was not to exceed £200. Subsequently, this scheme was abandoned when Colonel de Burgh offered to erect the new pavilion (today’s junior clubhouse), provided the club pay him 5% interest on his outlay, plus extra rent, and agreed to take a 31 year lease of the property. An estimate of £250 from J Hyland, Friary Road, Naas, for construction of the pavilion was accepted in April 1906, the Club agreeing to pay the amount over and above the £200 guaranteed by Colonel de Burgh.

In the year before the 1914-18 war the Country Kildare Club was one of the outstanding sports centre in Ireland, in cricket, lawn tennis and hockey, it’s members were to the fore.  Not much has changed in 2021 as the Club has fielded many rising stars in the Irish tennis arena. Cricket and the cricketers were the dominant force in those pre 1914 days.  Fixtures were arranged with all the leading Leinster clubs, including Phoenix. Two-day matches were quiet common with full lunches being served, prepared by permanent staff, and tea was taken at 4 o’clock. At that time the British army was strong. There were barracks in Naas home to the Royal Dublin Fusiliers and Newbridge home to the Royal Horse Artillery and in Kildare the Royal Field Artillery and the many cavalry and infantry regiments on the Curragh.  Many of the officers played cricket and tennis.

While many games were played at the Club through the years, Polo, Pigeon Shooting, Trap & Pearifle, Shooting, Cricket, Hockey, Rugby, Soccer and Pitch and Putt, the only game that survived was Tennis, lucky for us!

In 1919 after World War 1 the Committee was reformed, Wednesdays became Club day for tennis with tea provided for 9d (old pennies).  In 1920 ladies were permitted to become members and in 1929, Mrs Sargent was the first lady member elected to the Committee, the club was certainly ahead of its time in this regard. Mrs Molly Rooney, who owned a thriving news agency in main street was the 1st Lady Captain in 1935.

In those early prior to the second World War the club finances were in a precarious position,  the non-payment of subscriptions as a result of the Wall Street crash meant that the Club had to renegotiate its lease with the de Burgh family who thankfully reduced the annual rent by £7 and the club continued to operate.  Members maintained the grass courts on a rota basis for 3 years.  The County Kildare Open Tennis Championships were not held after 1939 due to low entries, lack of transport and shortages of tennis balls and nets. Socialising in the Club was affected due to tea and sugar rationing!  Throughout the late 40’s and 50’s the club struggled with its membership. In1948 a decision was made to borrow £100 to buy a motorised lawn mower.  However, in 1947 the stairway leading to the balcony in the junior clubhouse was sold for £2 to raise much funds.  In 1957 and 1958 the committee organised a number of dances to raise much needed funds.  It’s hard to imagine this in 2021.

The Club since its inception hosted the County Kildare Open Tennis Championship.  Many beautiful trophies have been presented to the club during its long history including the Men’s Singles Challenge Cup presented by Algernon Algernon Odlum was won in 1939 by the legendary T.G (George) McVeagh, a member of the Irish Davies Cup Team 1933-1948. The Ladies Singles Challenge Cup was presented in 1934 by Mrs Wallis, Irish Open Champion 1924,1926, 1930 and 1933. This cup was mislaid and subsequently found in Fitzwilliam Tennis Club in the early 80’s . The senior tournament took place again in 1962 and 1963 and was only revived in 1983 and attracted many Davies Cup,  Federation Cup and international players over the years.  In 1977 Mary Rose Lyons held the first Country Kildare Open Junior Championships which at its peak attracted over 550 entries from all over the country. These many tournaments would not have been possible without the generous support of sponsors such as JF Dunne, Odlum Group and many local businesses who continue to support our Club today and of course the many members who organise and continue to do so.

I will conclude now and although there is so much more to the history of our Club I hope I have given you a taste of the early years.

Mary Rose was a lifelong member, developer and supported of the club. She held many roles within the club – Coach, Junior Chairperson, Ladies Captain, Honorary Secretary and Chairperson. In 2004 she was presented with the “Raymond Eagan Award” by Tennis Ireland which is given to volunteers for special services to tennis in Ireland. In 2006 she was the recipient of the “Muriel Bolton Award” which recognises a Lady member for her contribution as a  player or administrator to the Dublin Leagues. She had a particular passion for junior players, who she believed to be the future of the club.